There is a moment when every mother knows. For me it was around 32 weeks. The little legs growing inside me were just not kicking as hard as I thought they should be, as I remembered the pain I endured during my first pregnancy. I recalled how, by the end of the day, my ribs would be bruised from stretches, kicks and somersaults and my hips would feel likewise. In fact, there were many times I considering going into see my doctor to make sure everything was as it should be but just as I would pick up the phone to call I would feel  the reassuring movement telling me that my baby was alive and well and I would put down the receiver.
But I knew.
I knew something was different. I knew that the possibility of abnormality was there as we chose not to have any testing done. And while nobody said anything during my three ultrasounds, as I looked at my baby’s first photo and the few to follow, I knew they too looked different from my first.
These are the things I never said when I was pregnant.
Labour came easy just a short 3 days after my due date (my first was a week late). It started in the wee hours of the morning and sporadically came and went throughout the day. I endured what I thought to be Braxton Hicks as I set about my tasks, refusing to allow myself to think that my baby might be on it’s way. I ran errands and made dinner and it was only by the time that I sat down to eat, that I considered that this might just be it. My mother sat with me as my husband taught music lessons and the contractions became stronger and stronger. When Ben was finally finished with his students for the night we began preparing to go to the hospital. Before we left, I took a bath to soothe the pain but instead, the pain only worsened and as I got out, I knew what labour – real labour (not the induced kind I had with my first) felt like.
When we arrived at the hospital, just a short drive away we went straight in and the nurse checked my cervix. I was 10 centimetres. She asked if I felt like pushing, but I didn’t, the baby hadn’t dropped and I didn’t feel any pressure. They broke my water and took me into one of the birthing rooms.
With each painful contraction, they told me to push. After some time, I finally said…or maybe yelled, “It’s not moving! Just give me a C-section.” They continued to tell me to push. I knew something was not right, the baby was in the wrong position, back on back and stuck. The pain was horrendous. Unable to take anything for it, they injected saline solution into my spine – this, was more painful than the contractions themselves but it managed to ease the pain a bit following.
Seeing that this (being the baby) clearly wasn’t going anywhere, they called in the surgeon. He is well known in our town for his long slender wrists and working miracles.
He managed to turn the baby and with a push and a pull, we finally met our sweet, squishy Ella Freda on June 8th at 11:29pm. I didn’t hear crying right away but it came soon enough and they passed me my precious baby girl. Words cannot explain the emotions I felt in that moment- the complete elation that we had a baby girl and the complete horror, alarm, consternation, distress, surpass, fear, panic that I felt as I gazed into her eyes, saw her flattened bridge, her tiny folded ears, pointy little cone head and funnel chest.
I don’t remember who I said it to first but I needed to say it before anyone else did, “I think she has Down Syndrome.”
“No, she’s fine, she’s beautiful.”
To be continued…. 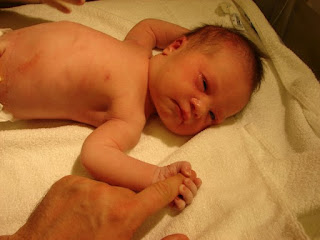