I’m Tired and I’m Not The Only One #SpecialNeeds

This morning, I walked particularly slow past Rachel Notley’s house (the Premier of Alberta and my local MLA). I pass it multiple times a week on my way to our neighborhood coffee shop and am always hoping that one day, more naturally than not, we will be two neighbours simply bumping into each other and striking up a casual conversation – how’s the weather? are you ready for Halloween (her house is always totally creeped out) and isn’t the ravine just stunning this time of year. I want to ask her if she read the letter that I dropped by her house. I slipped the plain white envelope with a hand written “Rachel” on the front in her mailbox just a couple days after I met with a representative in her constituency office to talk about how the Edmonton Public School District is failing my daughter and how to prevent other families from getting stepped on in the future. I called her office again today, because I have a new item to discuss – why the office of Alberta’s Family Supports for Children with Disabilities won’t return any of my calls and why our case-worker was a no show to our intake meeting. As I said in my message, “I am the parent of a child with a disability – it’s not like I don’t have other things to do.” Because that is just it – there is always something else to do. There is always more paper work, more meetings, more fighting our asses off to get our kids the same human rights as every other kid all the while sitting with them for hours after school to keep them up in math and reading at the very least. Of course this happens only between speech therapy appointments, doctor’s appointments and additional tutoring. The ironic part is that many of these appointments are paid for out of our own pocket, which means that somewhere between all of the above we are also working into the wee hours of the night to make the extra money we need to pay for the supports the government can’t afford. As parents, we can’t afford to not afford them – we make it work.

This week I have read two posts about how tiring it all is. We are all so very tired and not only that but we feel like failures. Sue, a friend of mine wrote, “I fear the only people that care are us. And us are tired. Really tired.” We work so damn hard and yet it doesn’t seem good enough. One parent said, “Well, one thing we are consistent about is our failure as parents.” I call office after office and all I get is radio silence. So why call – there are many reason including basic rights of the individual, my care for families and individuals who have trouble speaking up for themselves but I also call because I NEED support! Sue goes one to say, “This is how the government forces people who have disabilities or those who are caring for people with disabilities into poverty.” True story. My husband is a student and I have three kids – how does the government expect me to pay for the speech therapy that they refuse to provide? Adding insult to injury, I was told this week (by someone who would know) that the reason she doesn’t get speech therapy is because she is labelled as having a SEVERE SPEECH DELAY. Now if she had a moderate speech delay, that would be a different story and she would, in fact be given weekly speech therapy at school. That’s right, she’s been written off. Friends, this is bullshit. Come on Canada, we can do better.

Tonight, just like practically every other day, someone commented on how I deserve an award for having a child with Down Syndrome. Spare me. They don’t even know all of the above – they just consider the isolated instance of a diagnosis. And yet, that is just it. The day to day presents enough challenges without being buried under a mountain of paper work, financial stress and feeling like a failure. At the Inclusion Alberta information lunch I attended today, one parent said that they went to bed every night worried that their best wasn’t good enough.

Parents of children with special needs, I see you. I see you.

I wish there was more that I could do for you. I am working on it. I work on it every single day but until I get that face-to-face with Rachel Notley or Justin Trudeau, know that I think you are some of the bravest, kindest, most awesome people I know. Carry on warriors, carry on. 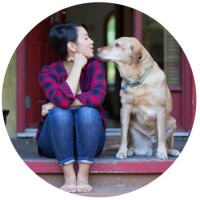 Gerber is Only the Door to a Broader Conversation #Inclusion
February 13, 2018

Such a great post. Thank you for being such an encouragement to so many parents out there who are struggling and feel alone. It seems we get better assistance for our children with special needs here in the U.S. but I know many parents who are tired, nonetheless. It’s exhausting work, so thank you for fighting! It helps to know someone like you is on the front lines.